Improv Everywhere has recently turned a New York City subway car into a “human mirror.” It was done by filling a New York subway car with identical twins dressed alike and facing each other.

“We would get on the 6 train at the start of the line at Brooklyn Bridge and the twins would sit on either side of the car, directly across from their sibling. Once in place, their job would be to mirror each other as closely as possible. If one scratches his head, so should the other. If anyone asked them what was going on, they should claim not to notice anything unusual and not to even be able to see their sibling.”

Sounds Fun eh? Read more and check out their behind the scene photos at their blog. 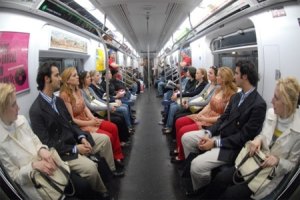