The God and Devil Show: Madonna

From the creators of Happy Tree Friends, Mondo Mini Shows has launched a whole new series, The God and Devil Show. Different celebrities show up on a talk show hosted by God and the Devil themselves. So far the guests have included Angelina Jolie, Britney Spears and Walt Disney.  At the end of each episode the guest may be sent to heaven or hell.

In this episode God’s reunited with his first love… is it Madonna or The Madonna?

Tom Brady Puts On A Suit For Esquire

No he didn’t! Yes he did! The New England Patriots QB, Tom Brady, throws himself into a suit for this month’s Esquire.

On God and football: “When you try to combat everything, at the end of the day you realize that you’re responsible for yourself…Look at the attention I get: It’s because I throw a football. But that’s what society values. That’s not what God values. He didn’t invent the game. We did. I have some eye-hand coordination, and I can throw the ball. I don’t think that matters to God.“ 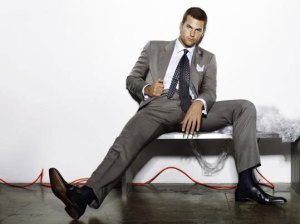 Designer Marc Jacobs covers the June/July 08 issue of Interview magazine (celebrating what would have been Andy Warhol‘s 80th birthday on August 6), donning false eyelashes and a classic white Warhol wig for a series of portraits that seem to shift from illustration to photograph. A very Andy Warhol drag homage.

In the interview, Marc Jacobs says; “Warhol is Warhol. He’s practically a god. I thought, ‘I’m going to get a lot of hell for this.”

We sometimes see colleagues who were promoted suddenly becomes bossy and mean and a righteous law student becomes a greedy lawyer. Why do Angels fall from grace?

In 1971, American psychologist Philip Zimbardo conducted a Standford prison experiment with the help of 24 volunteering undergraduates. They played the role of prisoners and guards in a simulated prison.

The volunteers adapted to their roles a little bit “too well.” Some of those who played guards became sadistic and violent towards the prisoners. The “prisoners” were emotional traumatized and some even had a nervous breakdown. This lead to the two week experiment to end on its sixth day.

Zimbardo emphasizes on external factors and systems, including personal interpretation and imitation also have an effect on how a person behave as supposed to internal factors such as genes and personalities.

Thus the soldiers who commit rape and the guards who abuse prisoner all turned in to God’s once beloved Lucifer from the bible. He who became arrogant and hoped to challenge God has fallen from grace— turning into Satan.

The long awaited new song by the Bastard’s Fairies. This video is positively horrific and message constitutes an “oh great and what?” response. I wonder why is Hugh Hefner grouped with the politicians? Yet, this video is oddly hypnotic.

Notice the book the guy is reading is “God is Not Great” by Christopher Hitchen.

A mall that supports artists, Delay No Mall

The G.O.D. boys Douglas Young and Ben Lau did it again. They turned Hong Kong upside down with the most outrageous party of the year. Bringing together a high energy group of hip hop ballers, fashionistas, the ultra chic underground, and of course, all the pretty boyz. Half naked models all around and if you felt like getting your own kit off a game of strip poker was wide open. 24 Herbs, the edgy cantonese hip hop band kept the crowd crazed while FINDS restaurant made sure endless cocktails flowed down the throats of the super fabs.

The mall was open recently and is going to expand itself to include sleep pods, bars and tattoo parlours. The controversy is that the phrase “Delay no mall” (or G.O.D.’s slogan, Delay no more) sounds similar to “F**K YOUR MOTHER” in Cantonese. That’s why the founders had to explain the name again and again in their videos. Do they intend to offend anyone? You decide.

Shoppers can find ‘Delay No Mall’ at 68 Yee Wo Street , next to the Regal Hotel.