Most Beautiful Man for September: Not Surprised

Yes, it’s the one and only Michael Phelps. It’s no surprise to anyone that Mostbeautifulman.com has chosen this 14 career Olympic gold medals winning Olympian.(Now let’s not forget he also holds seven world records in swimming. Him being the man of the month is predictable, but I’m not complaining.

Scissor Sister Jake Shears will be featured on the cover of the coming issue of BUTT, the quarterly gay journal which is equal parts raunch and literary interviews. This time it’s by the fabulous designer/photographer Hedi Slimane. This fall issue – no. 24 – will be out late August. With loads of contributions by BUTT readers and interviews with Jake Shears from New York, Rosa von Praunheim from Berlin, Will Munro from Toronto and ‘Your Big Dick Host’ from Brooklyn.

Chad White as Icarus for OUT

For OUT’s September issue, photographer Francois Rousseau remade the myth with Chad White as a fashion forward Icarus. Icarus was the son of Daedalus, who crafted two sets of wax wings so he and his son could escape exile in Crete. He warned Icarus not to fly too close to the sun, which Icarus did. Icarus fell into the sea. Of course, he wasn’t wearing a feather scarf by Burberry Prorsum at the time.

See the full set of photos at OUT 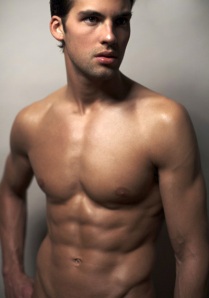 Mostbeautifulman.com chooses Ryan Vigilant to be its most beautiful man of the month.  Vigilant has only been modelling for three years but already landed ad campaigns for “Levis,” “D&G” and “Nike,” as well as gracing the pages of “Maxim Style” and has been photographed by numerous elite photographers in the fashion industry: from Greg Vaughn and Joe Lally, in his first two years.  Obviously Mr. Vigilant’s career is flying.

I just couldn’t help sharing this when I saw it in my email. Apparently Mr (or is it Mrs really?) Orange is found naked with Ms (or Mr, it’s hard to tell the gender of fruits) Banana half naked. Should this be called cross-racial or cross-breed relationship?

Model Garrett Neff, who’s the face and body of Calvin Klein and Calvin Klein Jeans (remember the billboard for CK Man Fragrance?),  is set to be hitting billboards and magazines again this autumn for the new Calvin Klein’s Body and Body Stretch underwear.

According to DNR, “Shot on location in Miami by renowned photographer Bruce Weber, who shot Calvin Klein Underwear’s first ad campaign 25 years ago, the sexy black-and-white images epitomize the very clean yet sensual aesthetic that Calvin Klein has become so well known for. Neff, who is the face of the company’s fragrance, Calvin Klein Man, was featured alongside Kate Bosworth in the spring ad campaign for Calvin Klein Jeans. He succeeds Academy Award–nominated actor Djimon Hounsou as Calvin Klein’s latest body.“