Preppy Olympics uniforms? Yes it’s here and it’s by Ralph Lauren! The velvet leotards, the flips and the landings are all oh so lovable! Standard red, white and navy blue are used (and they compliment each other perfectly). No doubt the American team of this year’s Olympics will look preppier than ever. The opening-ceremony look consists of classy navy blazers with white driving hats and canvas walking shoes; for the closing ceremonies, it’s classic polos and sleeveless sweaters.

Go to Guest of a Guest for more photos. 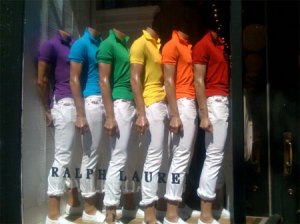 The retail community decided they would participate in the Gay Pride week in New York City this year. The Ralph Lauren boutique down on Bleecker Street in the West Village features mannequins who are wearing Polo shirts in rainbow colour.

Meanwhile, Marc Jacobs is also selling a T-shirt featuring the Confederate Flag in rainbow colors. The store features a giant poster with Jacobs in high heels, a graphic patterned fur coat, an amusing hat and a face full of makeup.